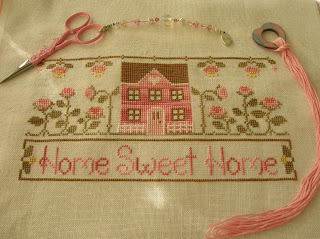 I seem to have less and less to post about just lately due to the fact that Christmas is coming and a lot of what I'm doing will be for gifts.
I finished this Home Sweet Home piece by Country Cottage Needleworks a few weeks ago but have only just gotten around to taking a picture.
I used the recommended mix of Crescent Colours and DMC threads. Sorry I don't remember what fabric it is.
The scissor fob is from Mary Kathryn and the mother of pearl thread holder is by Vikki Clayton and available at her website for the grand total of 0.25 cents each!
The colours in this piece are very pink. I plan to turn it into a pillow eventually once I have found just the right fabrics.
Posted by Solstitches at 6:48 AM 25 comments: 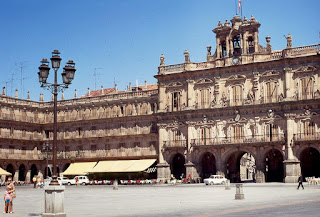 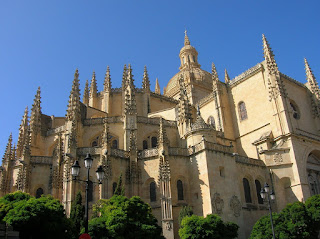 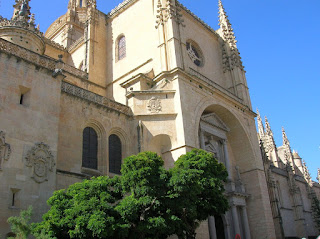 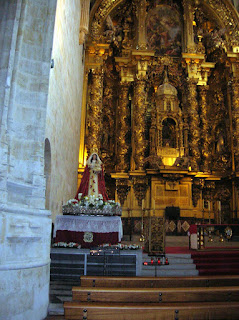 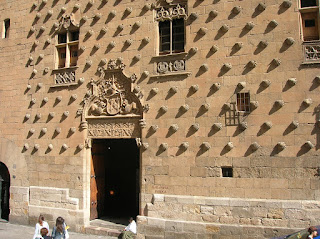 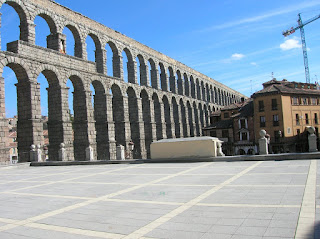 This post has no sewing or stitching content but is for those of my friends who enjoy seeing the different areas of Spain that we visit.
A few weeks ago we went on a short six day break to Salamanca, a city in Western Spain that dates back to pre Roman times.
The city lies on a plateau by the Tormes River, which is crossed by a bridge of Roman origin.
The Plaza Mayor is the central square in the city. It has a capacity of 20,000 people and was originally a venue for bullfights but is currently used primarily for concerts. The plaza is regarded as one of the finest squares in Europe.
Among the many tourist attractions we visited was the University of Salamanca which was founded in the year 1218. Many people continue to come from all parts of Spain to study at the University, and the students represent a high percentage of the city's population.
We also visited the old Romanesque cathedral which was founded in the 12th century and the adjoining new cathedral which was built from 1509 and was still being finished in 1734. In the treasury is the bronze crucifix that was carried into battle before El Cid.
Another must see is the House of Shells which was constructed during the 15th century. In total, there are approximately 400 shells on the exterior of the building. I don't know what it was used for way back when but these days the building is a public library.
Another place we visited was Segovia which is situated about an hour north of Madrid.
I think this was probably my most favourite place. It has a famous Roman aqueduct that is an engineering marvel of 166 arches and 120 pillars in two levels. It is made of 20,400 large, rough-hewn granite blocks, joined without mortar or clamps.
It was built to bring water from 15km away. Amazing!
Posted by Solstitches at 12:54 PM 13 comments: