The tale of two lap quilts. 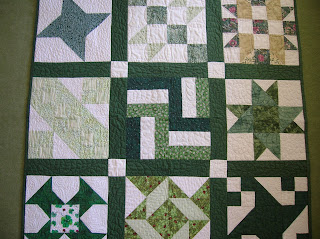 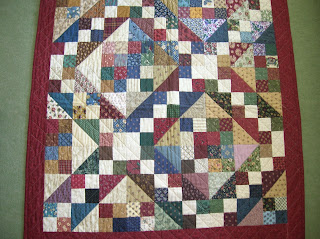 In my previous post re my finished cross stitch piece I had laid the stitching on a quilt for the photo shoot.
Heidi, an avid cross stitcher and quilter extraordinaire who is a member of my stitching group, had asked in the comments box about the quilt which she recognized as being made from Thimbleberries fabrics.
So here begins the tale of two quilts...............
About four years ago, maybe a little longer, I decided I wanted to try quilting.
Even further back than that I'd been to a few quilt shows as I just loved to look at all the glorious quilts on display.
I joined a Yahoo group - I don't remember the name of it now but I learned quite a lot from the people posting to the group.
There was talk of a St Patrick's Day swap and I was eager to join. We were split into groups of twelve and each had to make twelve blocks of our choice using green and white fabrics.
I chose to do Jacobs Ladder. I remember struggling a bit as I was inexperienced but somehow I finally finished my twelve blocks.
When the blocks were done they were to be sent to the swap hostess who swapped them back out. I received one of my own blocks plus eleven others. Some were made better than mine and some were worse so it was interesting to see how others worked.
Meanwhile the blocks lay untouched with the vague notion that one day I might make them into a quilt.
Shortly afterwards I discovered how much I loved the Thimbleberreis range of fabrics and I joined another Yahoo group that was devoted exclusively to Thimbleberries.
The group would hold a monthly bingo. To enter, each person had to make a block the design of which had been chosen by the previous month's winner.
When bingo was called everyone would send their completed block plus one FQ of TB fabric to the winner for that month.
I entered several times and finally hit the jackpot! BINGO I won lots of lovely blocks all beautifully made and a whole bunch of fabrics I hadn't seen before.
I'm sorry to say my quilting never really took off. I was still working full time and was exhausted at night when I got home. I found cross stitch much easier to just pick up as and when I felt like it so I gave up quilting for the time being with the idea that I would start back up once I retired.
Well, sometimes things don't always go according to plan because we decided to retire to Spain. As part of my downsizing operation I packaged the quilt blocks up
and sent them to my wonderful penpal Sharon who lives in Iowa, USA.
Sharon and I had met through the pages of the Just Cross Stitch magazine but she had long since given up stitching in favour of quilting.
The first year we were here Sharon came out to Spain to visit us. Well, imagine my surprise when she presented me with two beautiful lap quilts made from the blocks I'd given her! She is the kindest and best person in the world and I am so fortunate to have her in my life.
Sharon had put the quilts together and then sent them to be quilted. The green one has some beautiful feathery quilt patterns and the TB one is cross hatched? I think......
So Heidi, if you are still with me that's the tale of my two quilts.
I've spent today working on my set of Thimbleberries blocks and this time I'll be making the quilt myself. I still have no idea how it will be quilted but I'll meet that problem when I come to it.
Oh, and I highly recommend you to visit Heidi's blog. If I were not so technically challenged I would give you the link but I have no idea how to do that so just go to
http://needlenecessities.blogspot.com/ and enjoy!
Posted by Solstitches at 10:41 AM

Hola Margaret! I thoroughly enjoyed reading your entry about the lap quilts. They are amazingly beautiful, and I am most fond of the one done in different shades of green. Do you have them on display in your home? And, you certainly have a gem of a friend in Sharon!

A good day to you,
Nancy

What a terrific friend Margaret, and what beautiful quilts. I love the Jacob's Ladder one, so pretty and a great and different way of doing cross hatching.

Hi Margaret
I found your blog and love the quilts. Wonders use of color tones.

Gosh Margaret,
I was thoroughly engrossed in your wonderful story of the origin of the quilts. What a lovely friend Sharon is. Sometimes people come into our lives and enrich them a hundred fold :>)
The Thistleberries quilting group sounds wonderful. I had never heard of the fabric but liked the material of both quilts very much. Thanks for a really enjoyable read.
Hugs, Angela

I just loved seeing both of these quilts Margaret! How special it is to have such a good friend as Sharon. That was so kind of her to do that and surprise you. They are both so pretty and there is nothing like a nice quilt sitting in a room to make it feel like home.

I am blushing at your comments about me and thank you for the kind things said. I hope one day that I can show you the quilts I have made over the years for real when we all get together. In the meantime, thanks for sharing these with me.

Those quilts are just gorgeous, what a friend you have found in Sharon! I loved the story you told, it reminds me that I will have time someday to finish all the projects I want! :)

What a beautiful quilt!!You have very kindness friend!I will go to the bolg page.

WOW...M.Q. (Margaret The Quilter). Excellent job. I look forward to seeing more quilted projects from you.

Yes Heidi's blog is awesome and well worth a visit or I should say repeated visits :-)

Stunning! You have a great friend!