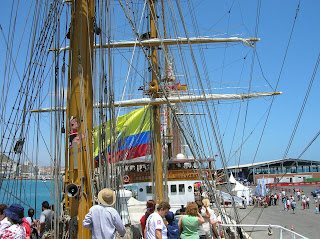 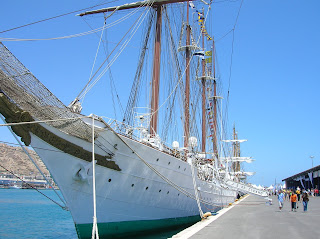 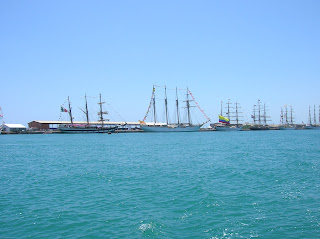 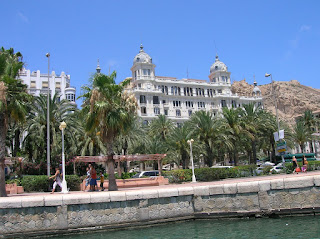 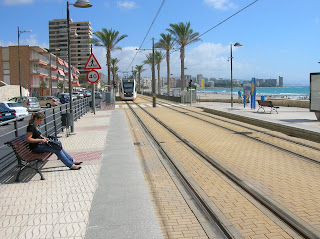 On Friday we went into Alicante by tram to see the tall ships that were moored at the port.
What a magnificent sight they were! Some were open to the public so we chose to go on one of the biggest that had four masts. It was from South America but we saw ships from France, Russia, Amsterdam, Romania, Spain of course, Portugal and Uruguay to name but a few.
The fleet features between 70 and 100 vessels from some 15-20 countries, staffed by thousands of young trainees who enjoy the experience of a lifetime. The aim of the Race is 'To enable young people of all nations to race together at sea under sail'.
Initially, the fleet gathers for pre-race practice on Spain's Mediterranean coast, at Alicante, followed by the first race up the coast to Barcelona.
Among the pictures I've posted are one of the tram took into Alicante and there's also a shot of one of my most favourite buildings in Alicante. An apartment block that has just been restored to it's former glory. It is so very elegant and quite beautiful. Be sure to click on the picture for a better view.
In the background you can see the castle way up high.
I've been up there and the views from the top are just spectacular.
Posted by Solstitches at 3:31 AM

Beautiful!! Thanks for pointing out the castle. I would have missed that.

OH MARGARET! These ships are amazing. You are so lucky to have seen this race - who won? I love the painting of Popeye on the one. Truly amazing!

The apartment block is very elegant like you say. Oh I wish I was there - it's just gorgeous!

Those ships ARE amazing! The ship we saw in Chicago is but a toy poodle compared to these!!! Spain looks so sunny and gorgeous. Love the architecture!

There are beutiful photos.