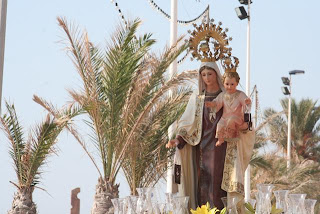 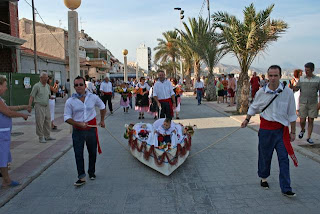 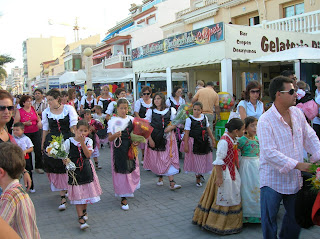 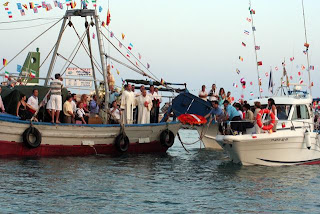 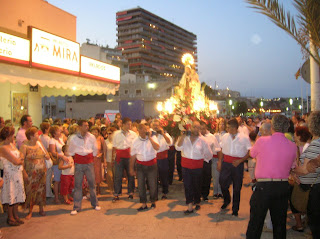 I think I mentioned in a previous post that if there is one thing the Spanish seem to enjoy it's a fiesta and yesterday saw the grand finale of a week of celebrations in honour of the Virgen del Carmen, the patron saint of fisherman.
July 16th is the day the statue of the Virgin is taken from the church and then out in a procession through the streets until it gets to the beach. Here it is taken out to sea in the decorated “jábegas”, accompanied by her faithful devotees, while the rest of the village residents and crowds of visitors look on from the shore.
There were dozens of small boats escorting the big one that took the statue out to sea. After half an hour or so of prayers and hymns the boats returned to the port where the illuminated statue was carried back through the streets and finally returned to the church and the evening ended with a spectacular firework display.
Even though I've seen it before the entire evening was magical. There is something very special about witnessing this yearly event.
Posted by Solstitches at 2:39 PM

Oh Margaret this looks like such a special celebration, and the statue is so beautiful. I love how she looks illuminated, and it is breathtaking that she is carried out to sea. No wonder this is something that you look forward to. Thanks for sharing this!

I seem to have missed your last few posts. My feed thingy must be messed up! Your Geranium House stitchery is wonderful!! And the story of 2 lap quilts was so sweet. Friendships like that are hard to find except among quilters! I too LOVE Thimbleberries and can't wait to see your new creation! The celebration looks like alot of fun. Bren

How beautiful, thank you for sharing these pictures. I love the celebrations for the Blessed Mother. I am portuguese and we have a lot of these celebrations also and they are special.

What a wonderful festival. thank you so much for sharing.

It reminds me of a scene I saw in a movie. Traditions of other lands are so interesting, thanks for sharing.

Thank you for the pictures of the parade and fiesta. I think the statue of Mary and Jesus is just beautiful and the last photo I thought it was on FIRE!! Thank you for sharing this special cultural and religious event!!!

HOW FUN!! The Spanish must be very happy people considering all the celebrations.