Time to catch up 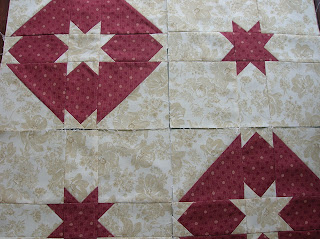 Has it really been this long since I posted anything here? Sometimes I wonder where the time goes............it seems to me I'm much better at reading other people's blogs than adding anything new to my own.
Probably because I don't have much to show you.
The last thing I stitched and finished was a gift for someone so I couldn't show it here in case they saw it. The stiching I'm working on now is a mailart exchange for someone else who pops in here from time to time so I can't show that either.
Instead I'll show off these quilt squares that I'm working on at my weekly quilt group meeting. They are taking me forever to do because I only ever work on them at the group meetings and the truth of the matter is that there is more talking than sewing going on there!
The fabric I'm using is by Thimbleberries. The light colour is from the Sedona Skies range and the red is from the Paintbox range I think.
I'm using a free pattern from Quilters Cache called the Goshen Star.
I have 13 of the red blocks done and two of the lighter, alternating blocks. These light blocks go faster so hopefully I'll get them done one of these days.
I don't have the least idea how to either hand quilt or machine quilt so don't hold your breath for a picture of the finished quilt!
Posted by Solstitches at 6:54 AM

Margaret this is going to be gorgeous! I love the fabrics you are using. Have fun in your quilt group. I will look forward to your finished project.

Excellent!!! Add "Quilter" to your long list of skills. I know you will figure out the quilting part and it will be beautiful.

Oh Margaret! This is going to be a beautiful quilt! I love the color and texture choices you made. It is going to be beautiful to use on display with your red and white needlework. Don't fret too much about the quilting. You can learn best as you go. I am even starting to look at machine quilting a bit easier than I used to. Don't forget, you can always rip out carefully what you don't like. You are doing a wonderful job and just keep believing in yourself!

Margaret, Just popping in :>)
You really are very talented and a definite multi tasker. With stitching, knitting AND quilting and taking beautiful photographs of where you live, when do you find time for any housework... haha! This looks really gorgeous. I love the colours and the pattern you have chosen. Keep us up to date with your progress.
Hugs, Angela

Those are beautiful blocks Margaret. Love the fabrics you've chosen. Don't worry about the machine quilting, it will come with practise. This I'm discovering as I try to learn more than just grid work or stitch in the ditch...

Oooh I love Thimbleberries. I have that same red print in brown. The blocks are beautiful. Your blog is wonderful. Thanks for the visit. I really enjoyed the pics of the beach, and the Civil War Diary Quilt book is one I am going to try to find. I LOVE quilt history. Especially American Civil War quilt history.

You'll tame that quilting. I have no doubt about it.