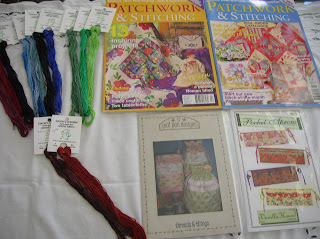 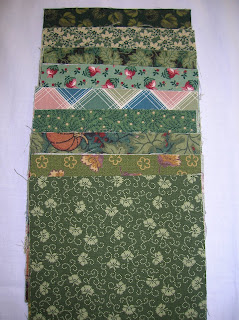 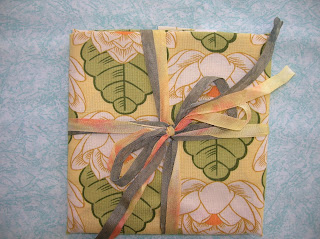 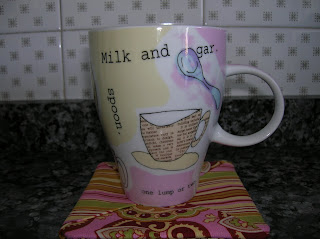 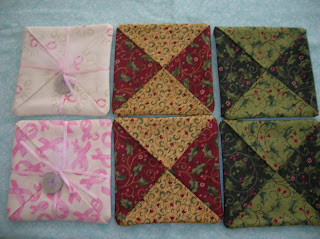 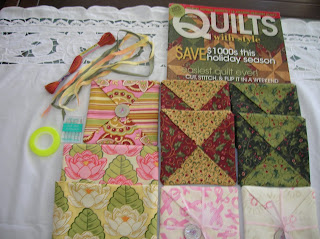 Those of you that know me well will have often heard me bemoaning the mail situation here and how I can go for a week or more without getting so much as a bill.
Not that I want bills but for someone who relies heavily on buying on the Internet waiting for those all important packages to finally be delivered is frustrating.
Today, however, I hit the jackpot! I received a whole bunch of packages and here's what was in some of them.
First up was a package from Christine in Canada
A short while ago Christine had made some mug coasters and I was one of the lucky five to receive a coaster for leaving a comment on her blog.
Christine had wrapped my coaster into the prettiest little package using some Amy Butler fabric (one of my favourite fabric lines) and she had tied it up with the most beautiful hand dyed silk ribbon.
As well as my coaster there were six more that Christine had sent along to donate to my quilt group fundraiser which is to be held next month in aid of Breast Cancer research.
Four of the coasters are in Christmas prints and the other two are done in pink ribbon prints. I really wish you could see these as each one has a Canadian 25 cent piece with the pink ribbon logo on it and these are in tiny little net bags attached to the coaster with ribbon. I know these are going to go like hot cakes!
Some other things in the package were a pack of machine needles for quilting, some green tape (not sure what that's for Christine) a skein of DMC Colour Variations thread, a quilting magazine and more yummy Amy Butler fabric.
Wow! That package was definitely worth waiting for :)
In another package were two patterns that I sent for from Buttonberry Stitches in UK. I usually buy just about everything online from the USA but the girls at Buttonberry are so helpful I was happy to pay a little more just to give them the business. I received a stitchery pattern pack for a drawstring bag by Australian designer Gail Pan and an apron pattern by Vanilla House.
The Buttonberry girls have also ordered in a couple of Cinderberry Stitches patterns especially for me and I can't wait for those to arrive.
On to the next package........I had ordered some Carrie's Threads in her sale and hmmmm, I'm not sure about how much I love these. It's my own fault as they were grab bags. I think I'll use them but I don't think I need to buy any more. It makes more sense to pay a little more for something you really love.
On to the next package which contained two of the wonderful Australian quilting magazines that I won on eBay and finally, another small package containing some Thimbleberries charm squares that were done as swaps with an online quilt group.
Now that's what I call a five star mail day!
Posted by Solstitches at 11:10 AM

What a terrific haul you have there Margaret. I just adore those threads. Do you have a link for purchase please?

A five-star mail day is right Margaret! Enjoy looking through everything. Beautiful fabric and threads. The mug rugs from Christine are gorgeous, and I love the coin tied in the netting. Have fun!

WOW, WOW, this sure announces a wonderful weekend, playing with your new "toys" ! - smiles -
Isn't life beautiful, when getting such fun mail ?
I'm happy for you, dear, ENJOY!

Hugs & smiles,
NADINE
(who is playing with your mailed "new toys", too ! LOL)

Margaret,
What a fantastic bundle of packages. Days like this are definitely rare. Your gift from Christine is just fantastic. I love those silk ribbons, the colours are beautiful. The mug rugs will be snapped up I'm sure. Your magazines look so inspiring as do all the other goodies. I love Carrie's threads, I've used them a lot recently and they stitch well so you might get used to them :>)
Warm hugs, Angela

Did you hug your postman?? What a terrific mail day!!!

You're right. You had a fantastic mail day. I love those kinds of days. Enjoy all your new goodies.

You hit a home run today with the mail goodies! Hope you enjoy all of them.

Mail is great fun. Enjoy your stash! The mug mat from Christine is really wonderful! She did a fabulous job and it is so sweet of her to have sent extra for the fundraiser! You are a sweetheart Christine!

what a beutiful gifts!!All wonderful!!