I love to stitch little things these days and have quite a few pictures that I haven't shown yet of the things I stitched/received before Christmas .
Some of them you may have seen on the blogs of the people that received them but hopefully they are worth a second look.
First up is Just Nan's Lady Scarlett's Christmas finished as a pinkeep 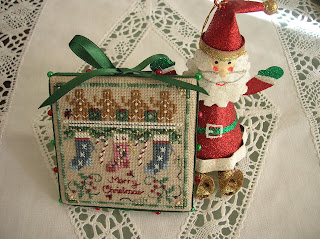 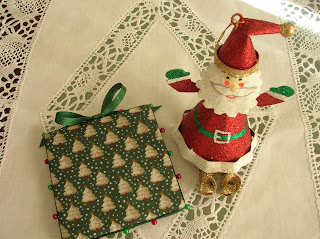 Next is Country Cottage Needleworks Peace from one of the JCS Christmas ornament special issue. I finished this as a pinkeep as well 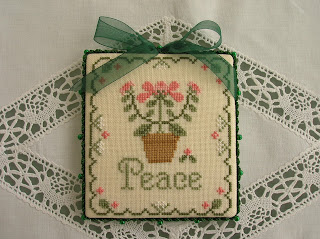 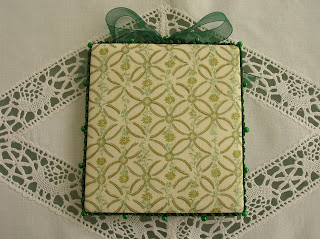 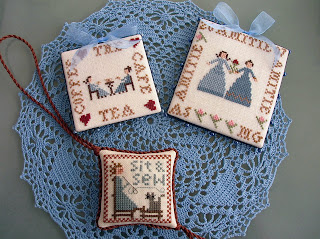 Next another little fob - this one taken from The Prairie Schooler's Garden Alphabet leaflet. 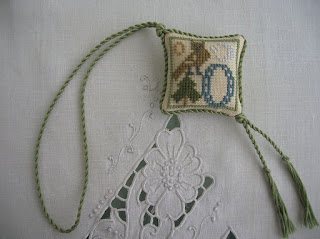 Here is my first attempt at finishing a biscornu. The design is the Spring Flowers freebie from Debbie Draper Designs. I stitched it on antique white linen with Vikki Clayton's Garnet silk thread. 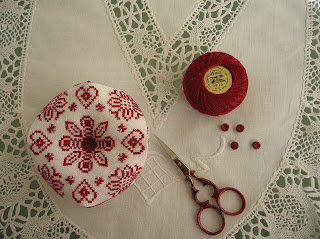 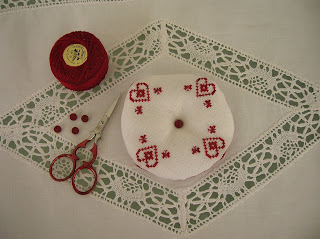 This is the front and back views of Shepherd's Bush Love fob. 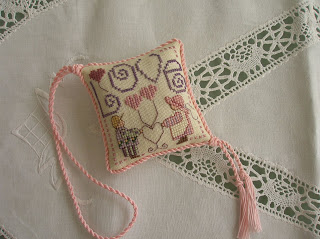 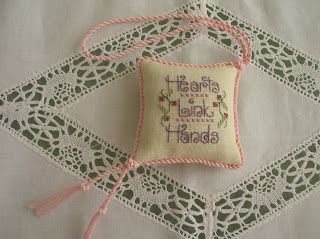 This little heart shaped pinkeep was stitched for me by my friend Brigitte in Germany isn't it pretty? 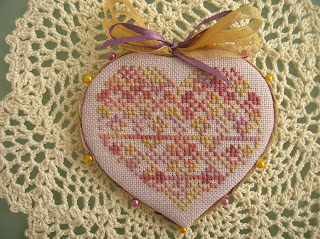 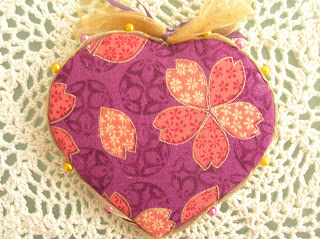 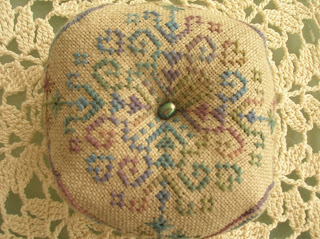 Stitched by me this is a little LHN design from one of the JCS ornament specials finished as a pinkeep. 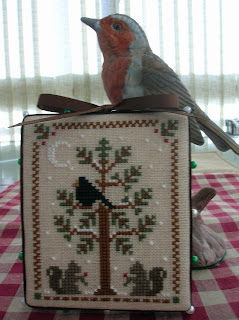 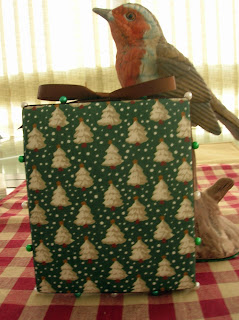 Here's a close-up of the stitchery I did on the pincushion part of a bit bag for Angela. The design is taken from Bronwyn Hayes Flowerbed Quilt book 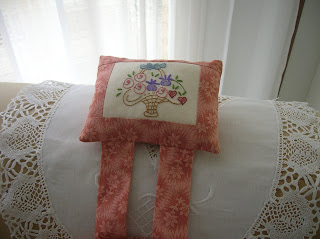 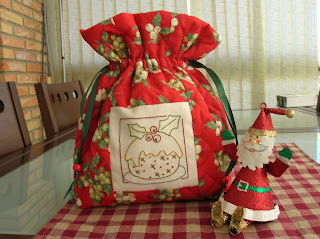 I hope you enjoyed the picture show!
Posted by Solstitches at 6:00 AM

Oh wow wow, Margaret!!
I'm so excited to see them, they are sooooooooooo lovely!
First three pinkeeps are so sweet!
Especially I love Just Nun's and the one from Au fil...!
You are so talented, they all are so neat and soft touch!
They made me feel like making more pinkeeps! :D

Very pretty Margaret. Ok, now remember I'm not a cross stitcher so I have to ask what's a pin keep, is it like a pin cushion? Also what's a biscornu? Love your BH stitchery, glad to see you're using the book.

Wow, what a wonderful post. I love the pinkeeps that you made, beautiful stitching and back up materials. I enjoy seeing the pretty stitching that you have received.

I forgot to say, what a wonderful biscornu. I am starting to use Vikki silk too.

I have to say, you have great taste in cross stitch designs. I wasn't really interested in working on smaller projects until I started reading your blog and seeing all of the nice projects you make. You definitely changed my mind.

What nice gifts you gave and received! I think my favorites are the Christmas pinkeep, the red and white biscornu and the winter ornament with the squirrels under the tree. I also really like the two stitchery projects.

Do you have any suggestions on web pages with tutorials explaining how to make pinkeeps and ornaments? I've not tried it before but I stitched an ornament some time ago and would like to complete it (before next Christmas!)

Thanks for your nice comments! I was thinking a word you'd probably like to know in Spanish would be cross stitch and I know I saw it somewhere recently but can't remember it now. If I find it again, I'll let you know. I'm looking forward to starting on some new cross stitch projects!

Margaret,
Your work is so lovely. When I visit you I want to get back to cross stitching. The gifts that you received are wonderful. Is there a site with a tutorial for the pinkeep that you know of. What a nice gift.

Wow, you were certainly busy before Christmas. Everything you've stitched is beautiful, and what a gorgeous job of finishing those pinkeeps and fobs ;)

Oh Margaret, What a treat it was calling by today :>) I loved looking at your beautiful stitching and at the pretty gifts you received. The more I see of these gorgeous stitchery bits the more I love them. The little Christmas pudding is lovely and, of course, I just adore my little ort bag with the pretty basket. I love that Just Nan pattern and have had the whole of Lady Scarlet journey in my to do list for I don't know how many years!! This IS the year to do it :>)
The heart pinkeep from britt is lovely, very delicate and beautifully made and your first biscornu is a huge success :>)
Thanks for a lovely treat :>)
Hugs, Angela

Oh Margaret! Everything looks so beautiful both given and received. Thanks so much for sharing your photos, and you an certainly do a variety of projects now. I love the pinkeep Britt made for you. It looks beautiful in the shape of a heart. And your biscournu is beautiful! Congratulations!

Oh my Margaret, what a feast for the eyes! Beautiful projects. Your finishing is just impecable. Of course I have my fav's :-)

Beautiful job to Britt and Rebecca too.

What a fabulous array of stitching, both by and for you... they are all so very pretty.
P.S. It was great to talk to you the other night and I look forward to meeting in a couple of weeks.

All of those projects are adorable. I may have to find a pinkeep pattern for me.

Margaret you have been busy - your finishes are delightful - I loved them all.

I really loved looking at your little show and thought I had a favorite but when I looked again I really don't they are all very very special - you always stitch and finish everything so beautifully. I too am really into stitching little things now.

I loved the picture show. Some I'd seen, some I'd missed, all were lovely. I think my favorite was the little SB fob, although the LHN works ones were right up there too.
Sue

Whoa...This post was better than going to a quilt and stitch show! And I have to ask, like Linda, what is a biscornu? I'm really digging your stitchin' and I especially liked the stitchin' you did on Angela's bag.

You bet I enjoyed it, Margaret ! Sooo many beautiful, delicate,works ... I'm in awe.

Those "Biscornu" are among my favourite (even the name is sdooo funny) BUT ... naïve as I am, I don't quite understand how to make one. Could you, eventually, blog a tutorial, when you've got some time, pleaaaaazzzzzz, Margaret ?

THANKS, dear!
Hugs & smiles to you,
NADINE

Wow - that about sums it up! WOW - great pictures - great stitcheries.

Wow - that about sums it up! WOW - great pictures - great stitcheries.

I'm afraid I need a bib now just to keep the drool from soaking thru my shirt...LOL! That was an awesome array of finishes! Well done!

I'm with Sonda -- I'm drooling all over my keyboard. What beautiful stitching and finishing! Congratulations.

All of these are truely wonderful Margaret! You are an amazing stitcher and your finishes are perfection. I must say I really love that sweet little stitchery basket on Angela's pincushion. It is such a nostalgic and vintage design.

Wow, Margaret, all these are just beautiful! I especially love the Just Nan pinkeep.

Thank you for sharing all your lovely projects. They are all so beautiful - the stitching and the finishing. Divine.

Margaret, you do the most beautiful work! Everything is perfection. I love all of the little items you made, especially the pinkeeps. I hope you have lots more to share.

I did enjoy the picture show, Margaret, and what gorgeous work you did. I am so proud (and honored) that you made the pinkeep for me! Thank you so much!!