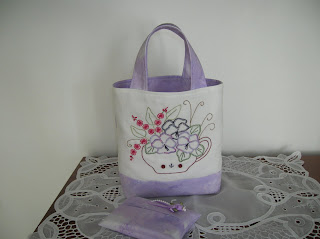 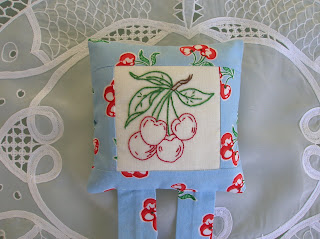 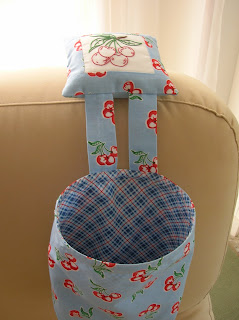 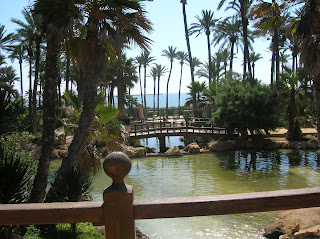 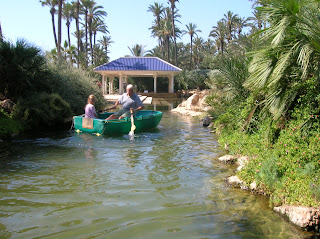 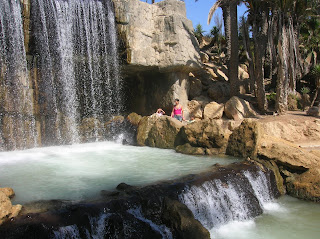 On the stitching front................ my stitching time is almost zero so the only finish I can share is something I did for a stitchery swap via sweet p's blog
As I'm new to this type of embroidery I was a bit nervous until I found out that I would be stitching for Bren a good friend who also started stitching about the same time as me.
I turned the finished stitching into a tiny tote bag and with the leftover fabric made a matching tissue holder. I also had a piece of cherry print fabric that I decided to turn into a thread catcher so I stitched a cherry design onto the pincushion area and it turned out quite nice.
I have other things (mostly cross stitch) in the works but can't show them just yet as they are for a mail art exchange.
Posted by Solstitches at 6:04 AM

I can't imagine rowing in a dingy in that sort of heat Margaret.. Your stitchery items fro Bren are jusy gorgeous, and I know Bren adores them.

Margaret, the tote is beautiful - I love the stitchery and the finishing. Where sis you find that stitchery pattern? I think I would like to do it.
TIA
Ginger

Your pics of the stitchery items are much better than mine! I put a close up of your stitchery at the top of my sidebar. Linda is right, I DO adore them. The thread catcher is already catching threads!
So glad you are having fun with your family. The heat can be a real hindrance!

Beautiful stitchery projects. I'm glad Bren enjoyed them. Thanks for joining the swap. I only started my swap project today.

Visiting with family is always fun. The park looks like a wonderful place to enjoy time together.

The bag you made is absolutely adorable, Margaret! I think you have mastered this technique! the thread catcher is awesome, as well! I am so glad you are enjoying having your family, before you know it they will be gone and you'll have some lovely memories. The pictures certainly make it look HOT!

Both of these projects turned out gorgeous Margaret! You always do such nice and professional work. I know the recipient of these will love them.

The park you went to is so pretty and exotic looking. It looks like everyone was having a good time in spite of the heat. I'm glad everyone is enjoying their visit to Spain.

Excellent stitching and finishing Margaret. Your so pro and make me envious of all your wonderful creations :-)

The park looks awesome and so tropical. I'm sure a fun time was had by all.

Enjoy the precious time with your family.

The cherry pincushion is terrific as is the tote. Looks really nice.

Wow Margaret,
Your stitching is really amazing. You don't look like a beginner at all and worry totally unnecessarily about joining these excahnges. Anyone would be thrilled to be paired with you :>) I love the little bag but have fallen in love with the little thread catcher. I definitely need one of these as my bits of thread are everywhere - you'll have to teach me how to make one.
Your photos of the park are brilliant. You have such interesting places near you. I'm sure the family are having a fantastic holiday.
All my love Angela :>)

I wondered if you perhaps had visitors again. :-)

I love the swap items you did and am sure that you swap partner loved both the tote bag and the thread catcher which are done to your usual perfect quality! Great job on both!

I can't wait to see your mailart once Angela gets it.

Hey Margaret.....You are missed at the FTLOCS group! I love your embrodiery projects. I also have the cherry fabric and love the colors of blue with red. Have fun with the family and hurry back to chat.

I love your bag Margaret - what a beautiful finish. Your visitors look as though they are having fun - at least they will be enjoying some sunshine!