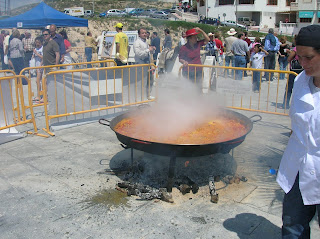 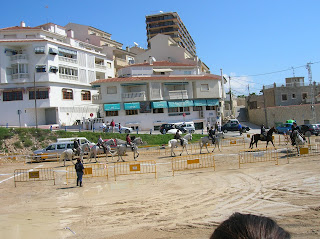 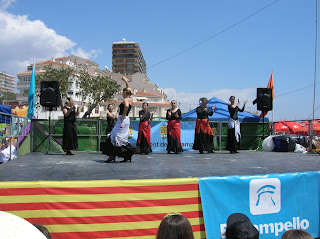 If there's one thing the Spanish love it's a fiesta - any old excuse and they're having a party.
I'm not sure what this one was in aid of but there was a big stage set up in the middle of town, lots of booths around the side where the wine was flowing freely in both senses of the word. Lots of different tastings of this or that local delicacy and a giant paella being cooked off to one side.
I'm a member of the line dancing team at the English Speaking Club and we were to do a demonstration. It's the first time in my life I've ever tread the boards LOL and I was terrified. Luckily the event started 90 minutes late (another Spanish trait) so instead of the 16 dance routines planned we only had to do four. DH took pictures but, thankfully he had the camera in the wrong mode and the pictures didn't come out - yes, honestly!
Another thing I had wanted to show you was our patchwork and quilting group booth. They'd put on a wonderful display but that picture didn't come out either.
Anyway, it was a nice morning in the sun. The pictures that did come out are of the paella (I didn't fancy any of this!) horseriding and some Spanish dancing.
Posted by Solstitches at 5:44 AM

It looks like it was lots of fun. I like to line dance but I don't know very many steps, and I don't go dancing except at wedding receptions or very special holiday occasions, sometimes a Christmas dance. But when I get to, it's lots of fun.

What wonderful photos Margaret! Thanks for sharing the Spanish party. I know your line dancing was perfect, and I wish I could see your photo dancing. Oh well, another time.

Oh wow! I'm so happy you are sharing pictures of Spain. It's nice to see what Spain looks like through your eyes.